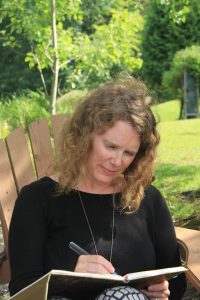 French is my cradle language but English is the language I dream and write in.  Since I was old enough to hold a book in my lap, I’ve been in love with the cadences, rhythms and sounds of the English language. Some of my earliest memories are of poring over the big book of fairy tales my mother read aloud to me.  Once I learned how to read, it became my favourite thing to do. My dream was to write my own stories and make them into books.

Growing up, that dream never faded. It got pushed around a bit and neglected, but it never left me.

Because my dad was in the Canadian Armed Forces, my family moved around a lot. We lived in Germany and on many different army bases across Canada, from Quebec’s North Shore, where I started school, to Yellowknife, in the Northwest Territories, where I did grades 4, 5 and 6. Since the time I could write, I recorded my thoughts, dreams and hopes in a journal. Over the years, I accumulated a pile of them. They are the only thing I’ve kept from my nomadic childhood. But I still have them all, in a box in my closet.

The summer I turned twelve my family moved to Tiberius, in Israel, where my father served as a United Nations peacekeeper on the Golan Heights between Israel and Syria.  We lived there for five months. When war broke out with Lebanon, Israel’s neighbor to the north, we moved to Beirut, where my father was operating officer of the United Nations Observer Group. We spent seven harrowing months there, at the height of the Lebanese civil war and the war with Israel. I poured my heart into my Middle East journal. These were the seeds of what would become my first book—a memoir called Peacekeeper’s Daughter. Click here to read a chapter.

In 1983, my family came back to Canada and settled in Quebec, where my parents were both born and raised. After so many years of living like a nomad, I’d finally found a place to call home.

I went to university and fell in love with a man with a strong personal geography, whose  roots went down deep into the soil of Quebec’s Eastern Townships. We got married, bought a house on a lake and raised four kids together. We travelled the world as a family, visiting far-flung places like Mozambique, Khatmandu, India and Lhasa, Tibet. But we always came back to our house on the lake.

I worked as an elementary school teacher, then went back to school to get an M.A. in English Literature from McGill University, with a specialty in Renaissance love lyrics. That sparked my eighteen-year career as a professor of literature. Sometimes, in the middle of a poetry lecture, I’d pinch myself to make sure I wasn’t dreaming. It was a great job.

But eventually, rather than teach about great writing, I wanted to create my own. I’d had a few poems and stories published (click here and here for a taste) and been nominated for some awards (click here to learn more). But four kids and a teaching career didn’t leave much time for writing. When my youngest child started kindergarten, I took a leave of absence from the College and started writing the children’s novel that would eventually become Millicent of Rose Hall. I went back to school and completed an MFA in Creative Writing from the University of British Columbia.  I’d found my sweet spot.

Several years later, I’m deep into my third novel. I write about the things that keep me up at night, the mysteries that ask to be unravelled. Everything I write is a love song to the English language and a celebration of what it is to be fully alive in this complex and beautiful world.

Baste the Raw Edges, Fasten the Yoke from Louise Abbott on Vimeo.